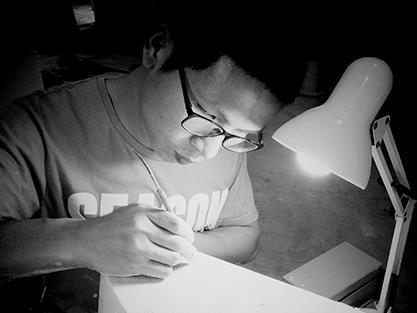 When reading the Book of Changes, I have had a certain understanding of the concept of The Infinite. Because I like Chinese traditional culture, I
often read books such as the Book of Changes and Zhuang Zi, and have obtained the knowledge from these books, which has influenced my artistic creation imperceptibly. Porcelain clay is the basic material for ceramic
creation. When faced with a piece of original material, I like to show the beauty of clay in the simplest way, so I created the artwork The Infinite by beating. When this mass of clay stands on my workbench, it looks like the chaos before the universe is formed. When I beat this mass of clay to
make it move, it slowly expands, with texture, ups and downs, curls and fractures. All these changes show beauty after strenuous exercise. Just
like the infinite gives birth to tai chi, tai chi gives birth to four images, and the four images give birth to eight diagrams, thus evolving all things. Any small point is like a universe, such as a cell, a seed, a big tree, and very small objects also contain the avenue, while large objects are also made up of very small objects, so in my mind there are a lot of large and small objects colliding, but all of these in the end I like to be grouped into a
circle, shaped like a circle, without boundary. I hope that the world we live in, different cultures, different races and different beliefs can all seek
common ground while reserving differences and jointly form a harmonious earth, just like countless small fragments in my works, and the circle formed is very beautiful and harmonious. The infinite is the infinite power, the infinite government and the infinite end. Countless small groups form a harmonious circle. This circle is our world. I think what China is doing now is to eliminate totalitarianism, extreme government and extreme end, unite all mankind and make the world one.